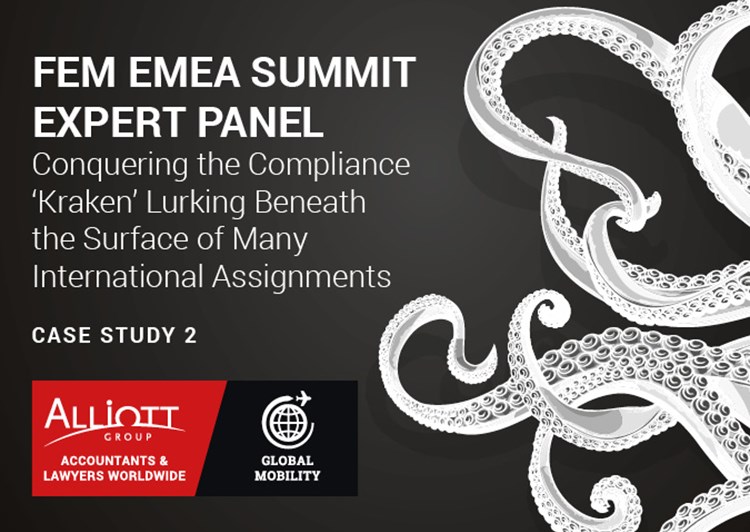 Our second case study was presented by Kathie Gaber, Principal and Chair of the Business Immigration Practice Group at Masuda Funai, Chicago. Meet Nick, a UK citizen who spends 75% of his time travelling to the US, Europe & Australia:

In this case study, there are various immigration, tax and employment law ‘tentacles’ that need to be fought with and manacled!

We are seeing an increasing number of these types of scenarios due in large part to the Buy American and Hire American (BAHA) Executive Order, effective April 18, 2017, issued with the intent to promote the hiring of American workers as opposed to the sponsorship of foreign workers, among other purposes. With regard to immigration, BAHA requires the US Secretary of State, Attorney General, Secretary of Labor, and Secretary of Homeland Security to propose new rules and guidance, and to supersede or revise previous rules and guidance, to protect American workers and to prevent visa fraud and abuse. Governmental agencies are only now starting to issue new guidance with regard to visa issues/processing. Consequently, all visa applications and entries into the US by foreign nationals are much more highly scrutinized than before.

Note: For purposes of the immigration analysis, we will assume that Nick decides to renounce US citizenship (after consulting with US tax advisers).

The B-1 Visitor for Business nonimmigrant classification allows Nick to engage in legitimate business activities of a temporary nature which do not amount to productive employment. As a UK citizen, Nick is eligible to use the Visa Waiver Program although he must demonstrate compliance with the B-1 requirements to the US Customs and Border Protection (CBP) Officer when entering the US. It is extremely important to know precisely what Nick is doing each time he enters as that will determine whether he may be classified as a business visitor. Immigration regulations affirmatively classify the following activities as permissible: conducting commercial transactions; negotiating contracts; consulting with business associates; litigation activities; participating in conferences; and undertaking independent research. All other activities are discretionary, taking into account the frequency and lengths of prior visits.

Since Nick has previously been sent to secondary inspection, there is likely a “lookout” in the system and he should expect to be extensively questioned on his next entry. A refusal at the port of entry can result in expedited removal which comes with a five year bar and so the stakes are very high. If denied entry, Nick will no longer be eligible for future use of the visa waiver program. Short of applying for a working visa, Nick may also consider applying for an actual B-1 visa at the US Embassy in London, setting forth more detail regarding his eligibility which could facilitate his entry.

With regard to the upcoming two month assignment, Nick should consider the “B-1 in lieu of H-1B” which is a hybrid classification. Similar to the B-1, Nick must be employed and salaried abroad. Similar to the H-1B, the US activities must be classifiable as a specialty occupation and Nick must have corresponding academic or experience credentials to qualify. It will only be issued for a US assignment of six months or less.

The L-1 intracompany transferee classification is a viable working visa option if there is a qualifying relationship of parent, subsidiary, branch office or affiliate between Nick’s current employer and the US subsidiary. Nick has worked with the foreign employer for at least one year within the three years prior to application; and his current role can be classified as executive, managerial or specialized. This classification is flexible, allowing the US position to be full or part time, and allowing salary to be paid in either the home or host country. Although a desirable option for multinational companies, traditional petitions must be approved by the USCIS (US Citizenship and Immigration Services) located in the US before Nick can process his visa in London and the category has its lowest approval rate since inception in the 1970s. For this reason, if the US subsidiary has sales of $25 million, a total US workforce of 1,000 employees or at least 10 transfers in one year, it should file for the L-1 Blanket designation which streamlines the visa process and results in more predictable adjudications.

If Nick’s employer is the UK parent company, he may also qualify for an E-2 Treaty Investor visa as a manager or executive if the parent has substantially invested in the US subsidiary. This classification is not available if the ultimate UK parent is publicly traded and more than 50% of its shareholders are not British. No guidelines clearly define how much money is considered as “substantial” but a leased office with few hard assets can be problematic. However, if issued, there is no limitation on the number of years that Nick can spend in the US as long as he and the company continue to qualify.

Scott Shapiro, Partner at Weber Shapiro in New Jersey, comments: “There are some complications to consider. US citizenship is a benefit not to be taken lightly. If Nick remains a US citizen, he will be taxed in the US on this worldwide income and will be required to file a US resident individual income tax return unless he has renounced his citizenship. Moreover, he is required to submit FinCEN Form 114 disclosing assets held in foreign bank accounts if the aggregate value in the UK/ outside the US is over US$10,000.”

With regards to whether Nick’s securing of an employment based visa combined with the company paying a portion of his salary in the US, will affect where he is required to make social security contributions, Shapiro comments: “As long as Nick is not sent to the US for more than five years, then the US-UK totalization agreement provides that he may continue to be covered by the UK’s social security system.”

David Gibbs, Corporate Tax Partner at Alliotts in London comments “Nick is UK resident and by denouncing his US citizenship he may be clearly confirming his UK domicile and hence remains taxable in the UK on worldwide income. This is regardless of whether income is earned or brought into the UK but he will benefit from double tax relief where income has suffered tax at source overseas.”

Mark Fellows, Partner at Sherrards Solicitors in London, comments that it will be “important that Nick’s employment contract is clear regarding which country’s legal system and regime for disputes resolution should apply.”

Christian Bruetting, Partner at audalis in Dortmund does not see Nick triggering tax liability - income generated from occasional trips to Germany will not be subject to tax due to the protection afforded under UK-Germany tax treaties. Furthermore, EU rules mean that German social security will not apply either.

However, a complication could occur in the form of Nick’s activities in Australia amounting to the accidental creation of a ‘permanent establishment’ for his employer – in this event, explains Fitchett, Nick and his employer would have Australian tax obligations: “To avoid Australian income tax complications, in essence, care would need to be taken to ensure that Nick does not routinely sign and finalise contracts on behalf of his employer while in Australia.”

Missed the first case study? Read about Amélie, a Belgian national going on assignment to the UK for three years.